Skip to content
Home ? Resources ? Articles ? The History of the Internet

A Brief Guide to the History of the Internet 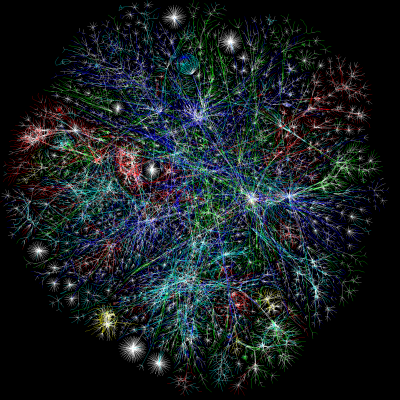 (Visual representation of the the Internet from the Opte Project.)

What is the Internet ?

The Internet is a worldwide system of interconnected computer networks that use the TCP/IP set of network protocols to reach billions of users. The Internet began as a U.S Department of Defense network to link scientists and university professors around the world.

A network of networks, today, the Internet serves as a global data communications system that links millions of private, public, academic and business networks via an international telecommunications backbone that consists of various electronic and optical networking technologies.

Decentralized by design, no one owns the Internet and it has no central governing authority. As a creation of the Defense Department for sharing research data, this lack of centralization was intentional to make it less vulnerable to wartime or terrorist attacks.

The Internet is a vast hardware and software infrastructure that enables computer interconnectivity. The Web, on the other hand, is a massive hypermedia database – a myriad collection of documents and other resources interconnected by hyperlinks. Imagine the World Wide Web as the platform which allows one to navigate the Internet with the use of a browser such as Google Chrome or Mozilla Firefox.

1957 ? USSR launches Sputnik into space. In response, the USA creates the Advanced Research Projects Agency (ARPA) with the mission of becoming the leading force in science and new technologies.

1962 ? J.C.R. Licklider of MIT proposes the concept of a ?Galactic Network.? For the first time ideas about a global network of computers are introduced. J.C.R. Licklider is later chosen to head ARPA’s research efforts.

1962 – Paul Baran, a member of the RAND Corporation, determines a way for the Air Force to control bombers and missiles in case of a nuclear event. His results call for a decentralized network comprised of packet switches.

1968 – ARPA contracts out work to BBN. BBN is called upon to build the first switch.

1972 – Network Control Protocol is introduced to allow computers running on the same network to communicate with each other.

1973 – Vinton Cerf working from Stanford and Bob Kahn from DARPA begin work developing TCP/IP to allow computers on different networks to communicate with each other.

1974 – Kahn and Cerf refer to the system as the Internet for the first time.

1976 ? SATNET, a satellite program is developed to link the United States and Europe. Satellites are owned by a consortium of nations, thereby expanding the reach of the Internet beyond the USA.

1976 ? Elizabeth II, Queen of the United Kingdom, sends out an email on 26 March from the Royal Signals and Radar Establishment (RSRE) in Malvern.

1979 – IBM introduces BITNET to work on emails and listserv systems.

1981 – The National Science Foundation releases CSNET 56 to allow computers to network without being connected to the government networks.

1984 – MCI creates T1 lines to allow for faster transportation of information over the internet.

1985- 100 years to the day of the last spike being driven on the Canadian Pacific Railway, the last Canadian university was connected to NetNorth in a one year effort to have coast-to-coast connectivity

1988 – Traffic rises and plans are to find a new replacement for the T1 lines.

1990 – Advanced Network & Services (ANS) forms to research new ways to make internet speeds even faster. The group develops the T3 line and installs in on a number of networks.

1990 – A hypertext system is created and implemented by Tim Berners-Lee while working for CERN.

1991- U.S green-light for commercial enterprise to take place on the Internet

1992 ? The Internet Society (ISOC) is chartered

1993- The first web browser, Mosaic (created by NCSA), is released. Mosaic later becomes the Netscape browser which was the most popular browser in the mid 1990’s.

1995 – NSF contracts out their access to four internet providers.

1995- Registration of domains is no longer free.

1996- The WWW browser wars are waged mainly between Microsoft and Netscape. New versions are released quarterly with the aid of internet users eager to test new (beta) versions.

1996 ? Internet2 project is initiated by 34 universities

1996 – Internet Service Providers begin appearing such as Sprint and MCI.

1999 – A wireless technology called 802.11b, more commonly referred to as Wi-Fi, is standardized.

2001 ? The spread of P2P file sharing across the Internet

2004 ? The Term Web 2.0 rises in popularity when O’Reilly and MediaLive host the first Web 2.0 conference.

2004- Mydoom, the fastest ever spreading email computer worm is released. Estimated 1 in 12 emails are infected.

2006- There are an estimated 92 million websites online

2006- Internet2 announced a partnership with Level 3 Communications to launch a brand new nationwide network, boosting its capacity from 10Gbps to 100Gbps

2008 ? NASA successfully tests the first deep space communications network modeled on the Internet. Using software called Disruption-Tolerant Networking, or DTN, dozens of space images are transmitted to and from a NASA science spacecraft located about more than 32 million kilometers from Earth

2010- Facebook announces in February that it has 400 million active users.

2012 – A major online protest shook up U.S. Congressional support for two anti-Web piracy bills – the Stop Online Piracy Act in the House and the Protect IP Act in the Senate. Many in the tech industry are concerned that the bills will give media companies too much power to shut down websites.

The Influence and Impact of the Internet

The influence of the Internet on society is almost impossible to summarize properly because it is so all-encompassing. Though much of the world, unfortunately, still does not have Internet access, the influence that it has had on the lives of people living in developed countries with readily available Internet access is great and affects just about every aspect of life.

Things that seemed like science fiction only a couple of decades ago such as paying your bills from your mobile phone or accessing your music library anywhere are commonplace today thanks to the Internet. The concept of cloud computing and having all of your files with you at all times, even when you are miles away from your computer, is another aspect of the Internet that gives people great convenience and mobility that were unimaginable before it. For example, opening up and working on a Microsoft Word file located on your home computer can be done from anywhere, as long as you have Internet access, thanks to programs like Dropbox and Google Drive or a remote desktop access program or application.

Communication has also been made easier with the Internet opening up easier ways to not only keep in touch with the people you know, but to meet new people and network as well. The Internet and programs like Skype have made the international phone industry almost obsolete by providing everyone with Internet access the ability to talk to people all around the world for free instead of paying to talk via landlines. Social networking sites such as Facebook, Twitter, YouTube and LinkedIn have also contributed to a social revolution that allows people to share their lives and everyday actions and thoughts with millions.

The Internet has also turned into big business and has created a completely new marketplace that did not exist before it. There are many people today that make a living off the Internet, and some of the biggest corporations in the world like Google, Yahoo and EBay have the Internet to thank for their success. Business practices have also changed drastically thanks to the Internet. Off-shoring and outsourcing have become industry standards thanks to the Internet allowing people to work together from different parts of the world remotely without having to be in the same office or even city to cooperate effectively.

All this only scratches the surface when talking about the Internet’s impact on the world today, and to say that it has greatly influenced changes in modern society would still be an understatement.

The Future: Internet2 and Next Generation Networks

The public Internet was not initially designed to handle massive quantities of data flowing through millions of networks. In response to this problem, experimental national research networks (NRN’s), such as Internet2 and NGI (Next Generation Internet), are developing high speed, next generation networks.

In the United States, Internet2 is the foremost non for profit advanced networking consortium led by over 200 universities in cooperation with 70 leading corporations, 50 international partners and 45 non profit and government agencies. The Internet2 community is actively engaged in developing and testing new network technologies that are critical to the future progress of the Internet.

Internet2 operates the Internet2 Network, a next-generation hybrid optical and packet network that furnishes a 100Gbps network backbone, providing the U.S research and education community with a nationwide dynamic, robust and cost effective network that satisfies their bandwidth intensive requirements. Although this private network does not replace the Internet, it does provide an environment in which cutting edge technologies can be developed that may eventually migrate to the public Internet.

Internet2 research groups are developing and implementing new technologies such as Ipv6, multicasting and quality of service (QoS) that will enable revolutionary Internet applications.

New quality of service (QoS) technologies, for instance, would allow the Internet to provide different levels of service, depending on the type of data being transmitted. Different types of data packets could receive different levels of priority as they travel over a network. For example, packets for an application such as videoconferencing, which require simultaneous delivery, would be assigned higher priority than e-mail messages. However, advocates of net neutrality argue that data discrimination could lead to a tiered service model being imposed on the Internet by telecom companies that would undermine Internet freedoms.

As next generation Internet development continues to push the boundaries of what’s possible, the existing Internet is also being enhanced to provide higher transmission speeds, increased security and different levels of service.

For more information on the history of the Internet, see the links below:

Close
Scroll back to top 富二代f2抖音app